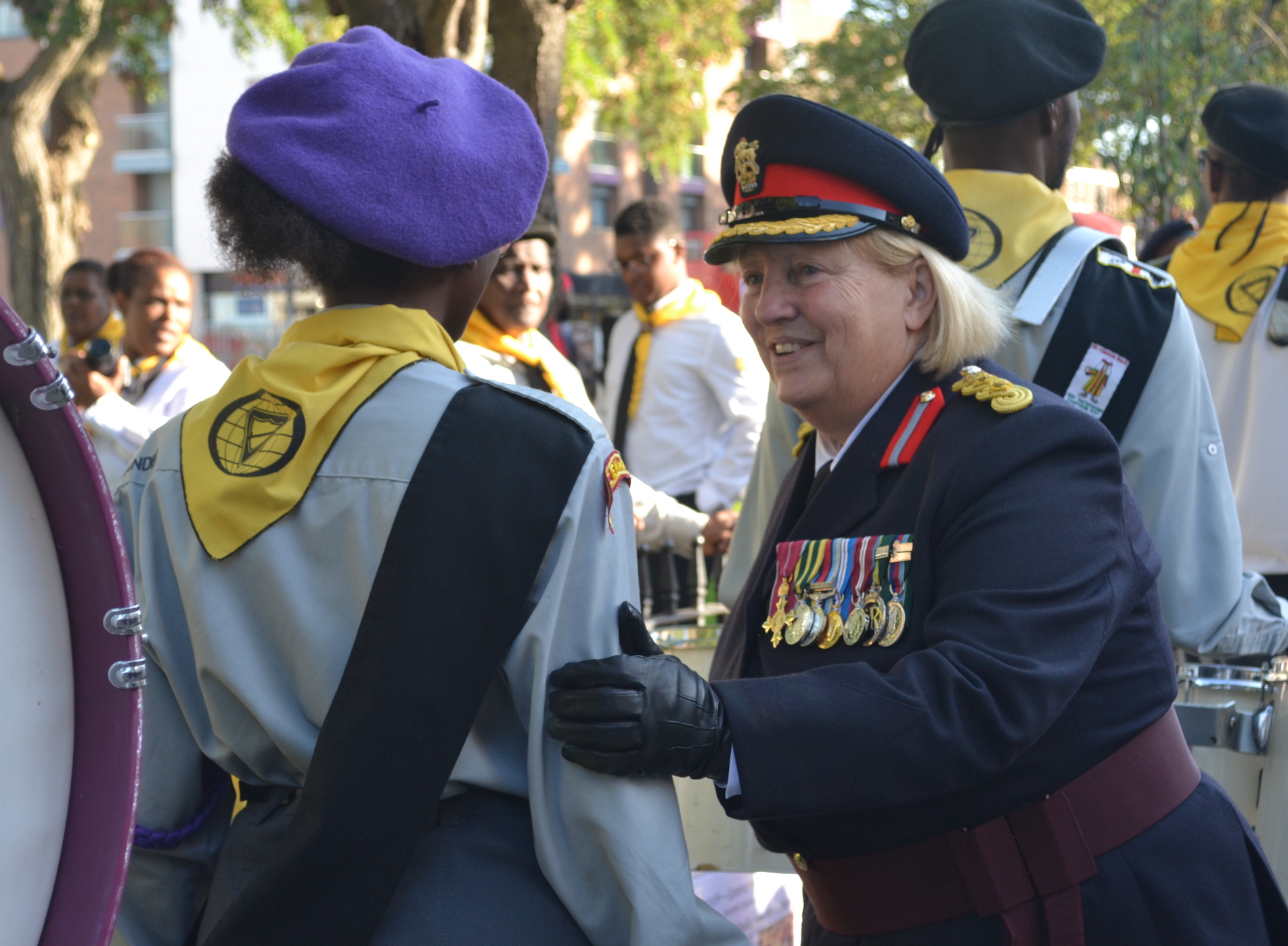 It's not every day that Lewisham church has a visitor who is a representative of the crown, but recently we had just such a person. Colonel Jane Davis OBE, Representative Deputy Lieutenant of Lewisham, spent the day with us and made sure to participate in the day's activities. The occasion was Pathfinder day and not only did she come and give the Pathfinders a heartfelt exhortation but she also participated in the worship , ate lunch with us, and then even went on the march to Lewisham town centre along with more than 150 Eager Beavers, Adventurers, Pathfinders and Master Guides who took to the streets and demonstrated some of what the Pathfinder club is about.This year's Pathfinder day had quite a few visitors in addition to Deputy Lieutenant Davis. There were Pathfinders from Holland as well as several clubs from in and around London who visited to show their support. During the morning's service, which started with the unmistakable sounds of the Drum Corps and the solemn procession of the flags and Bible, there were two presentations that really stood out. Firstly, Deputy Lieutenant Davis' speech where she encouraged the young people to do well in everything and counselled them based on her own life experience. She told them that in life, even if they didn't succeed at first at what they set out to do, they shouldn't give up because there will always be more opportunities just ahead. This was borne out in her own life, where after initially failing her exams when she left school, she managed to become a nurse and then climb the ranks of the Army Reserve, being deployed to Afghanistan, among other places. Her career culminated in her appointment as a Deputy Lieutenant, which is a ceremonial position whose aim is to assist the Lord Lieutenant in his duties which can be as varied as escorting Royal visitors, presenting honours, medals and awards on behalf of Her Majesty The Queen, attending civic and social events, and supporting charities and other voluntary organisations.The other memorable presentation was the sermon, which was presented by one of Lewisham Pathfinder club's own, Daniel Anti, who had not only grown up as an active member of the club, but had transitioned into the leadership as a Junior Counsellor and had only recently moved away to study law and received a scholarship from a prestigious law firm. His message was centred around Numbers chapter 13 and was about overcoming the so called 'Giants' in our lives. He explained that these Giants could be anything that could keep us from educational, spiritual or social success in our lives. He encouraged us to look to Christ for our strength and move away from complaining and negativity, giving us eight practical steps to help achieve that goal.After the morning's service, hearty lunch, and much socialising by the pathfinders, they embarked on the march to the town centre which is one of the ways the club raises awareness in the community. The drummers led the way while others handed out leaflets and spoke to interested or curious persons. They were accompanied by Deputy Lieutenant Davis who was at the front and marched like a true Pathfinder. The highlight of the march was the marching and drum demonstrations at the town centre where the Pathfinders display their skills by performing some of the more difficult moves and manoeuvres.On their return to church, the youth took part in a talent show and concert, where they exhibited some of the things they wanted to showcase. We even learned there were some hidden talents in our midst! Once again the Pathfinder club of Lewisham church went over and above expectations to demonstrate the good and positive aspects of youth in the borough of Lewisham and the Seventh-day Adventist church.[envira-gallery id="671008"]